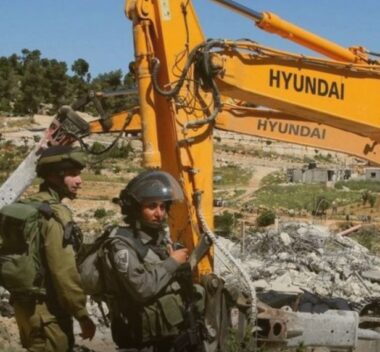 On Wednesday, Israeli soldiers invaded Husan village, west of Bethlehem in the occupied West Bank, and demolished an agricultural room.

Mohammad Sabateen, the head of Husan Village Council, said several army vehicles, including bulldozers, invaded the Ein Al-Balad area of the town before demolishing the room.

Sabateen added that the room is owned by a local farmer, Khalil Atiya Shousha, and was built on his privately owned land.

The Israeli army claimed the room was built without a permit from the so-called “Civil Administration Office,” the administrative branch of the illegal Israeli occupation.

It is worth mentioning that more than two-thirds of Husan is classified as being in Area C of the West Bank, under full Israeli control, where the occupation bars the Palestinians from building homes and sheds and constantly escalates its violations against the farmers.

Area C constitutes 60% of occupied West Bank lands that fall under Israel’s sovereignty, according to the Oslo agreement signed in 1993 between the Palestinian Liberation Organization and the Israeli occupation.

While Israel continues to deny construction permits to the Palestinians in occupied Jerusalem, and several parts of Area C of the occupied West Bank, it continues its policies of the illegal construction and expansion of its colonies in direct violation of International Law, the Fourth Geneva Convention, in addition to various United Nations and Security Council resolutions.