Palestinian In Jerusalem Forced To Demolish His home 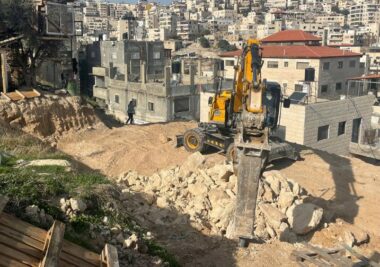 On Monday, a Palestinian from the Al-Isawiya town, east of the occupied capital, Jerusalem, in the West Bank, was forced to demolish his under-construction home.

Media sources said the Israeli City Council in occupied Jerusalem forced Tha’er Obeid to demolish his 100 square meter home under the pretext of being built without a permit.

Obeid told WAFA News that he had to demolish his home to avoid the excessively high fines and fees imposed by the city council if it carried the demolition out using its workers and equipment.

He added that if he filed more appeals and the city went ahead and demolished his home, he could face fines and fees that might reach 300.000 Shekels.

Obeid received the demolition order three months ago before he contacted lawyers and started a legal battle in Israeli courts trying to save his home but to no avail.

“My wife, myself, and our three children lived in a home we built on our land in Jericho city, but the army demolished it,” he added, “and now, yet again, Israel doesn’t want us to have a roof on our heads….”

Many Palestinians in the occupied city resort to constructing their homes without permits due to Israel’s continued refusal to grant them these permits, an issue that forces expanding families to live in small homes or apartments or build homes on their lands without permits.