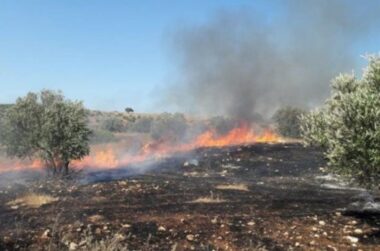 A group of Israeli colonizers, illegally squatting on Palestinian lands, burnt more than 50 Palestinian olive trees, Monday, and installed two mobile homes, on lands in the Sarrara area near the illegal Asfar colony, in the Shiokh town, east of the southern West Bank city of Hebron.

Local media activist, Ahmad al-Halayqa, stated that the colonizers invaded an orchard, owned by Mohammad Badawi al-Halayqa, along with his brothers Na’im and Nasser.

He added that the colonizers also installed two mobile homes on the Palestinian lands to install an outpost.

It is worth mentioning that the colonizers have escalated their violations against the Palestinians and their lands in the area, including attacking their homes, burning and uprooting their lands and trees, in an attempt to force them to leave, with the intent to expand their illegal colony.

Israel’s colonies in the occupied West Bank, including those in and around occupied East Jerusalem, are illegal under International Law, the Fourth Geneva Convention, and various United Nations and Security Council resolutions.

In related news, the colonizers attacked many Palestinian farmers near Burqa village, north of the northern West Bank city of Nablus, wounding three.