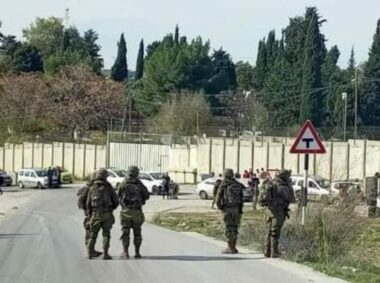 A group of fanatic illegal Israeli colonizers closed, Wednesday, the main road between the villages of an-Naqoura and Sebastia, north of Nablus, in the northern part of the occupied West Bank.

Mohammad Azem, the Mayor of Sebastia, said a large number of colonizers gathered on the road, and closed it.

He added that Israeli soldiers arrived at the scene but did not attempt to open the road or remove the colonizers, and instead, forced the Palestinians to leave the area and seek alternative routes.

Azem stated that the colonizers gathered in large numbers in preparation to storm the site of the evacuated Homesh colony, as they are constantly trying to rebuild it on the Palestinian lands and already installed an outpost.

On Wednesday at dawn, Israeli soldiers killed an elderly man been identified as Omar Abul-Majid As’ad, 80, from Jaljulia village, north of Ramallah in central West Bank, after detaining and constantly assaulting him in an under-construction home.

The soldiers also abducted at least eighteen Palestinians, and injured two, including a journalist, in several parts of the occupied West Bank.