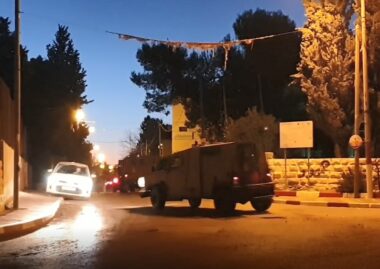 Updated: Israeli soldiers abducted, on Wednesday at dawn, at least eighteen Palestinians, and injured two, including a journalist, in several parts of the occupied West Bank.

Media sources said the soldiers invaded many communities across the West Bank, before storming and ransacking dozens of homes, and interrogated scores of Palestinians while inspecting their ID cards.

They added that the soldiers invaded Be’er al-Basha village, southwest of the northern West Bank city of Jenin, leading to protests, before the army fired many live rounds at the Palestinians, wounding one in the leg.

Among the invaded homes in Jenin are those owned by the families of political prisoners, identified as Yacoub Qadri, Shadi, and his brother, Sami and Haitham Ghawadra.

It is worth mentioning that Yacoub was one of six detainees who managed to escape from the heavily fortified Galboa’ Israeli prison, in September of last year, before they were captured a week later.

In Bethlehem, many army jeeps invaded Tuqu’ town, east the city, leading to protests mainly in the Khirbat ad-Deir area in the center of the town, before the army fired gas bombs and concussion grenades, in addition to shattering the windows of a car, owned by Salem Sha’er.

The soldiers also invaded Betunia town, west of the central West Bank city of Ramallah, leading to protests, and shot a journalist, identified as Yousef Shehada, with a rubber-coated steel bullet in the leg. (Video – Quds News)

In addition, the soldiers invaded Beit Anan town, northwest of occupied Jerusalem, and abducted a teacher, a former political prisoner identified as Eyad Elias Rabea’ from his home, after the soldiers stormed the property and violently searched it.

In related news, the soldiers killed an elderly man, identified as Omar Abul-Majid As’ad, 80, from Jiljilyya village, north of Ramallah, after abducting and constantly assaulting him in an under-construction building.