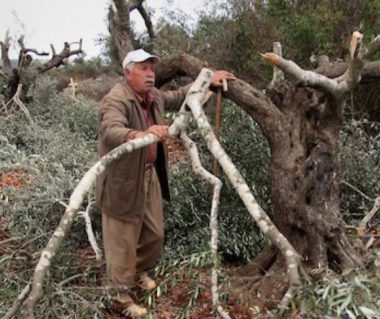 Hasan Breijiyya, the coordinator of the Popular Committee against the Annexation Wall and Colonies in Bethlehem, said the Israeli assailants cut at least 200 olive trees, owned by Kamil Khalil Sa’ad and ‘Amer Hussein Odah.

He stated that the attack is second of its kind in less than two weeks and added that the village is subject to frequent violations.

Its size used to be 9000 Dunams and lost 2000 for the illegal construction and expansion of Israel’s colonies, and is currently surrounded by colonies in addition to being subject to constant violations amidst attempts to remove its population.

The villagers live in old small brick homes, as Israel does not permit the families to build or develop their communities, in addition to demolishing seven homes since 2007.