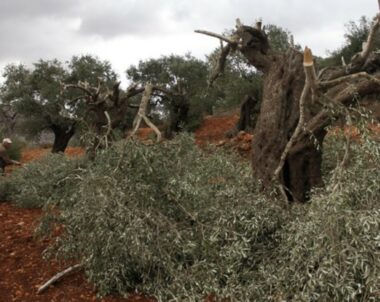 A group of fanatic Israeli colonizers, illegally squatting on Palestinian lands, cut and uprooted dozens of Palestinian olive trees, Friday, in the al-Jab’a village, southwest of Bethlehem, south of occupied Jerusalem in the West Bank.

The mayor of al-Jab’a, Diab Masha’la, stated that the colonizers infiltrated into Palestinian olive orchards, before cutting and uprooted dozens of olive trees that were planted by the Palestinians more than sixty years ago.

The olive orchards, in Saqfan ad-Dabe’, in the southeastern area of the village, are owned by a local farmer, identified as Rifat al-Tous, and his family.

It is worth mentioning that the orchards are isolated behind the illegal Annexation Wall, and family is only allowed to enter them twice a year; during harvest and plowing times.