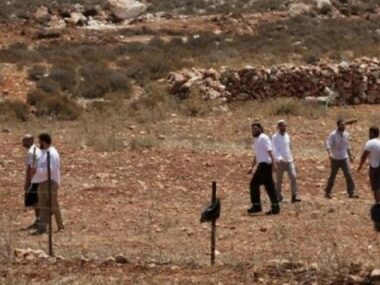 On Sunday, illegal Israeli colonizers destroyed an irrigation network and uprooted plants in the Ein Far’a area southwest of Hebron, in the southern part of the occupied West Bank.

He added that the colonizers destroyed irrigation pipelines and uprooted dozens of plants before fleeing the area.

Hijja stated that Ein Far’a is one of several areas with water springs used by Palestinian farmers and is subject to constant attacks and violations by the colonizers who frequently invaded those areas and installed outputs.

The colonizers are trying to force the Palestinians out of the area to expand the Edora colony and install news outposts by annexing more Palestinian lands.

Also, illegal colonizers installed an outpost on Palestinian lands in Khirbet Yanoun village near Aqraba town, south of Nablus, in the northern part of the occupied West Bank.