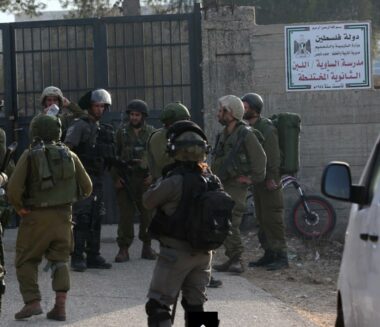 On Sunday, Israeli soldiers injured many Palestinians and invaded a school in the as-Sawiya town, south of Nablus, in the northern part of the occupied West Bank.

He added that the soldiers fired gas bombs and concussion grenades at the Palestinians, causing many to suffer the effects of tear gas inhalation.

Daghlas stated that Israel is trying to pave the new street leading to the Eillie colony by illegally annexing more Palestinian lands.

The work started a few months ago and led to the destruction of many agricultural irrigation pipelines extending from the nearby spring.

In related news, Israeli soldiers invaded the Al-Lubban as-Sawiya School twice in less than one hour and threatened to shut it down.

The soldiers told the school administration they would shoot and kill any student throwing stones at the army jeeps.

The school was previously shut down twice, especially since the soldiers also constantly deployed on the road that leads to it, and frequently harass the students.