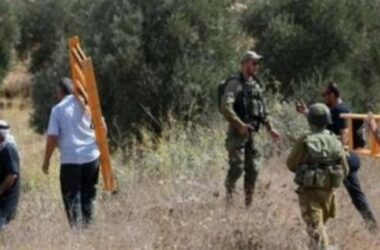 Local sources said the colonizers came from the illegal Bruchin colony, built on stolen Palestinian lands, and invaded an orchard in the Al-Aqaba area in the northern part of the town.

They added that Mahdi Odah owns the orchard and that the colonizers stole nineteen sacks of olives and other tools and olive oil press machines owned by Mahdi and another farmer, Amid ad-Deek.

The area is subject to frequent attacks and violations, including demolishing agricultural sheds and rooms, uprooting, cutting, and burning of trees, the theft of tools and supplies, and physical attacks against the farmers, including Abdul-Nasser Qaoud, who was attacked a day earlier.