WAFA: “Bakery believed to be punitively demolished near Shufat refugee camp under the pretext of illegal construction” 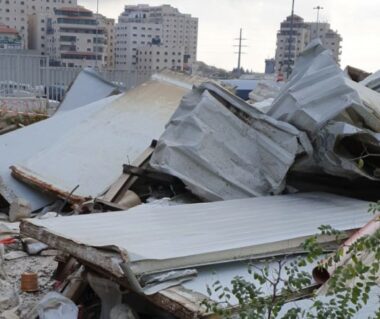 The City Council claims the owner did not have a permit for its construction, but the real reason is believed to be punitive.

The bakery owner, Ahmad Issa, said staff from the municipality and police raided his 110-square meter shop, which was built several years ago, and demolished it by claiming he did not have a permit for building it.

The bakery was rented to the Tamimi family, whose son, Odai, was shot and killed by Israeli soldiers last month, 10 days after shooting and killing an Israeli soldier at the Shu’fat camp checkpoint.

Since then, the Israeli occupation authorities have been taking several punitive measures against all members of the Tamimi family in Shufat refugee camp.