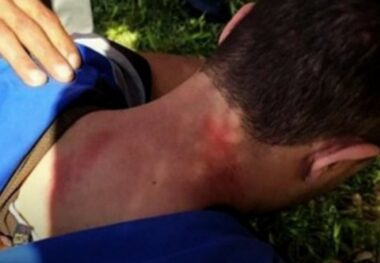 On Friday, illegal Israeli colonizers attacked and injured a Palestinian shepherd near Um al-Kheir village in Masafer Yatta, south of Hebron, in the southern part of the occupied West Bank.

Rateb Jabour, the Protection and Steadfastness Committees coordinator in Southern Hebron, said the colonizers came from an illegal outpost they recently installed on stolen Palestinian lands.

Jabour added that the colonizers assaulted Omar al-Hathalin, wounding him in the shoulder.

The colonizers also attacked Omar’s sheep, breaking the legs of some of them.

It is worth mentioning that Masafer Yatta witnesses constant violations by the colonizers and the soldiers as part of the attempt to illegally annex the Palestinian lands to build and expand the colonies.