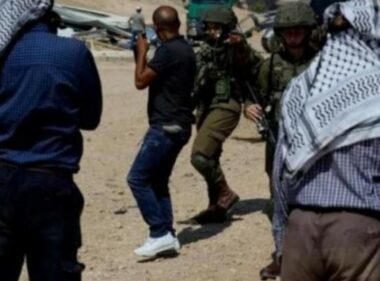 Israeli soldiers attacked, Friday, nonviolent Palestinian protesters in Masafer Yatta, south of Hebron, in the southern part of the occupied West Bank, in an area that the military illegally annexed to dedicate as a “firing zone.”

The Palestinians marched to their lands in the al-Mastaba area in Wadi al-Jawaya, east of Yatta, to affirm their rights on their lands and to reject the illegal Israeli policies and violations.

The soldiers assaulted many Palestinians and started pushing them out of their lands and attempting to abduct some of them.

It is worth mentioning that the Israeli High Court in occupied Jerusalem recently denied an appeal filed by the Palestinians from twelve communities in the area after the military declared then lands a “closed military zone” that would be used for live-fire military training.

The ruling would lead to the communities’ demolition and displacing of at least four hundred Palestinians from their dwellings.