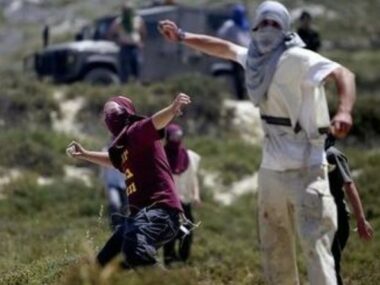 On Thursday evening, illegal Israeli colonizers attacked many Palestinians near Salfit, in the central West Bank, wounding two Palestinians, and hurled stones at Palestinian cars near Nablus, in the northern part of the occupied territory.

Media sources said dozens of colonizers invaded Kafr Ed-Deek town, west of Salfit, and attacked many Palestinians, their homes, and other property.

They added that the colonizers injured two Palestinians, who suffered mild wounds before the medics transferred them to Salfit governmental hospital for further checkups.

Ghassan Daghlas, a Palestinian official who monitors Israel’s illegal colonialist activities in the northern West Bank, said the colonizers also use the street to drive to and from their colonies, adding that they were attacking and throwing stones only at cars that carry Palestinian license plates.