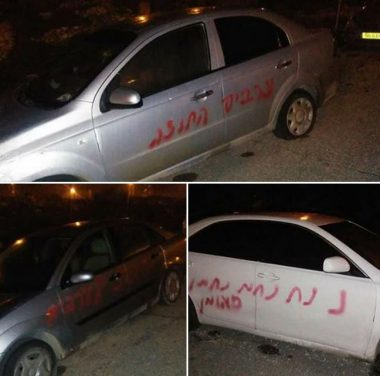 A group of illegal Israeli colonizers invaded, on Wednesday at dawn, the village of Beit Iksa, northwest of occupied Jerusalem, punctured tires of many cars, and wrote racist graffiti.

The Local Council in Beit Iksa said the assailants came from “Ramot” illegal Israeli colony, which was built on private Palestinian lands.

It added that the colonizers punctured tires of many cars in Aqbat Zayed and al-Burj areas, and wrote racist graffiti on the cars.

Beit Iksa is surrounded by the Annexation Wall, and subject to constant attacks and violations by illegal colonizers.

In previous attacks, the Israeli assailants also wrote racist graffiti on a local mosque, and burnt many cars.