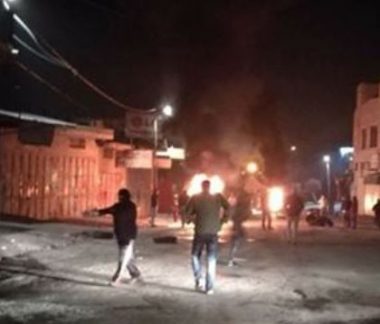 Israeli soldiers invaded, on Wednesday at dawn, ‘Azzoun town, east of the northern West Bank city of Qalqilia, and injured approximately 100 Palestinians, after the locals intercepted an invasion carried out by extremist Israeli colonists.

Media sources said dozens of armed settlers invaded the town, before locals hurled stones and empty bottles at the cars, causing damage, and forcing them out.

They added that Israeli soldiers invaded the town, and clashed with dozens of local youngsters, who hurled stones at the army jeeps, while the army fired dozens or rubber-coated steel bullets and gas bombs.

Medical sources said at least 100 Palestinians were injured, and received the needed treatment, mainly for the severe effects of teargas inhalation.

It is wort mentioning that dozens of Palestinians, from several parts of Qalqilia governorate, also rushed to the Azzoun, after the colonists invaded it, and managed to enter the town through bypass roads, to aid the residents.

Azzoun, home to 11.000 Palestinians, including at least 100 detainees, is surrounded by Karnei Shomron, and Kedumim illegal colonies, built on private Palestinian lands east and southeast of the town.