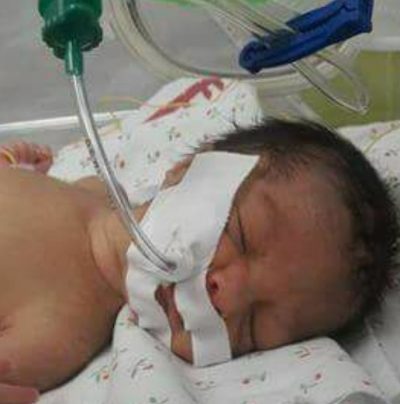 The Palestinian Health Ministry in Gaza reported Tuesday that a five-day old baby died in the intensive care unit of the Al-Hilal Emirati Hospital in Gaza. The infant, Hadia Mohammad Abu Hilal, died because of the lack of special medication required for the respiratory machine to function properly.

Her father, who is a pediatric surgeon at the European Hospital in Gaza, said that the medication needed was Calfactant, which is similar to a natural fluid in the lungs, and helps maintain effective breathing in premature infants whose lungs aren’t fully developed.

The death of the newborn was entirely preventable, according to medical experts, if the hospital’s neo-natal intensive care unit had been properly equipped with the basic medicine for treating premature infants.

This medicine, along with hundreds of others, has been prevented from entering Gaza by Israeli and Egyptian authorities for the past eleven years of siege.

Hundreds of Palestinian patients have died when they were prevented from leaving Gaza for treatment. Many more have died in hospitals in Gaza because of the lack of necessary medicine and equipment. Doctors and surgeons in Gaza complain of ancient equipment that they are unable to replace because of the Israeli and Egyptian siege, and the impossibility of finding spare parts for equipment when it gets broken.

Despite Israeli government assurances that the siege allows for entry of certain medicines, and allows patients to leave, eyewitnesses on the ground contradict the Israeli claims. They say that patients must apply for difficult-to-obtain Israeli permits, wait for hours at remote military bases in the middle of the desert (which is impossible for many patients because of their conditions), and then wait months to cross the Gaza-Egypt border for treatment.

In June of 2017, when 3 babies died in one week, the Hamas party in the Gaza Strip called on the international community to take immediate action to demand that Israel and Egypt end their siege on Gaza, which violates international law and the Fourth Geneva Convention. But no action was taken.

According to the January 2018 report on the Gaza siege by the United Nations Office for the Coordination of Humanitarian Affairs, “The exit of Palestinians from Gaza through the Israeli-controlled Erez crossing declined by almost 50 per cent in 2017 compared with 2016: on average, there were about 7,000 exits per month (as of 30 November), down from 13,200 exits per month in 2016. Prior to the start of the second Intifada in 2000, there were over half a million exits per month from Gaza, primarily for work in Israel.”

The report also stated, “By the end of November 2017, the approval rate for permit applications by Palestinian patients to travel via Erez was 54 per cent, down from 62 per cent in 2016. This is the lowest approval rate since 2006 when the World Health Organization (WHO) began monitoring patient access from Gaza. The decline is occurring alongside a gradual increase in the absolute number of referrals and related permit applications to West Bank hospitals in the wake of stricter constraints via the Rafah crossing.

“Most unsuccessful applications in 2017 were delayed, meaning that they were not processed in time rather than rejected on security grounds, i.e. no response was received by the date of the hospital appointment, requiring patients to re-schedule the missed appointment and submit another permit application. In situations such as cancer treatment, delays can have life-threatening implications for patient health.”