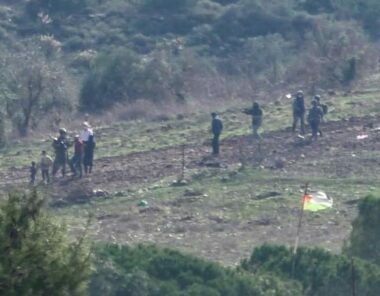 A group of armed Israeli paramilitary colonizers attacked Palestinian farmers Saturday evening while the farmers were cultivating their land in Surif village, north of Hebron in the southern West Bank.

According to the Palestinian Wafa News Agency, the Israeli colonizers ran toward the unarmed Palestinian farmers and began firing live ammunition with no provocation or confrontation. The attack took place in the Khallet Ali Aghneim neighborhood, in the Al-Qurainat area in the town of Surif.

Three Palestinians were wounded and were taken to the Hebron General Hospital, where they were treated for gunshot injuries.

Following the attack by the colonizers, the Israeli military then invaded the area and attacked the Palestinians that had gathered to protest the shooting. The army began firing rubber-coated metal bullets, sound bombs and tear gas to disperse the crowd, causing dozens of cases of tear gas inhalation to be treated in the field.

Israeli paramilitary colonizers frequently assault Palestinians but are not held accountable for their actions by any police or military authority.