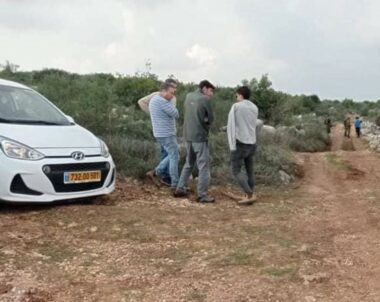 Local farmer Mohammad Shonnar stated that the colonizers came from the illegal Alei Zahav colony which was built on stolen Palestinian lands.

He added that the colonizers uprooted and stole eighty olive saplings in his orchard in the Khallet al-Qameh area, in the northern part of the town.

“I planted about 150 olive saplings in my land and brought eighty other saplings to plant them in my 250-Dunam orchard.” Mohammad stated, “However, the illegal colonizers invaded my land and stole the eighty saplings before Israeli soldiers arrived at the scene and confiscated my tractor instead of removing the invaders.”

Salfit governor Abdullah Kamil slammed the ongoing Israeli violations and called on the international community to provide the needed protection to the Palestinian people and to act on stopping these escalating assaults against the residents, their homes, lands, and even their holy sites.

Kamil added that the International Community needs to act fast and ensure Israel’s compliance with all related international treaties and resolutions, instead of allowing it to get away with its crimes without any repercussion.