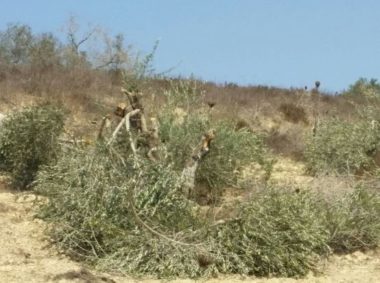 Illegal Israel colonizers uprooted more than 120 olive saplings in an orchard in Qabalan town, south of Nablus, in the northern part of the occupied West Bank.

Ghassan Daghlas, a Palestinian official who monitors Israel’s illegal colonialist activities in the northern West Bank, said the trees are in an orchard owned by a local farmer, Harbi Kamal.

While the attacks against Palestinian lands are frequent, they seriously escalate during the olive harvest season and include uprooting trees and saplings, harvesting the orchards, and stealing the produce, especially in the large areas of lands isolated behind the illegal Annexation Wall.

In related news, paramilitary Israeli colonizers attacked dozens of homes in the eastern part of Einabus town, south of Nablus, before the locals forced them to leave.