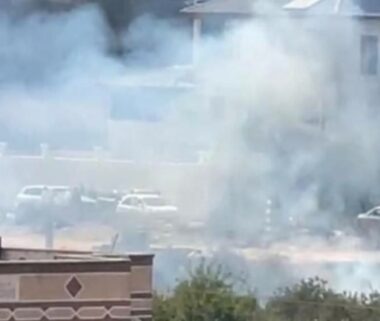 The Palestinians tried to fend off an attack by the colonizers who damaged property, including stores and cars, in invasions that started a day earlier.

Medical sources added that the soldiers shot two young men with live rounds and caused 25 to suffer the effects of tear gas inhalation.

They added that the soldiers also assaulted and injured three Palestinians, while another suffered burns due to gas bombs and concussion grenades.

Furthermore, a Palestinian medic was injured after being rammed by an Israeli military jeep.

In related news, the soldiers injured several Palestinians in Beit Dajan, east of Nablus, in the northern part of the occupied West Bank.

The army also attacked the weekly procession in Kufur Qaddoum, east of the northern West Bank city of Qalqilia, and shot three Palestinians.

Furthermore, Israeli soldiers shot one Palestinian and caused many to suffer the effects of tear gas inhalation during protests that took place after illegal Israeli colonizers invaded the town and destroyed property.

Earlier Friday, the soldiers killed two Palestinians, including a doctor, in Jenin, in the northern part of the occupied West Bank.

On Thursday, a nurse was injured after illegal paramilitary Israeli colonizers who invaded Huwwara and assaulted her, causing several injuries, including her face.

On Thursday evening, groups of paramilitary colonizers continued their invasions of Huwwara and fired many live rounds at Palestinian homes, in addition to burning cars and buildings.

In occupied Jerusalem, the colonizers assaulted many Palestinians and caused damage to many cars in addition to attacking homes, especially in Sheikh Jarrah.