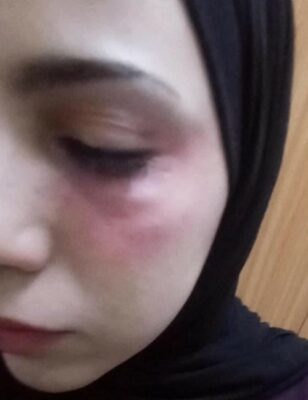 The Palestinian Health Ministry said a female nurse was injured after illegal paramilitary Israeli colonizers who invaded Huwwara town, south of the northern West Bank city of Nablus, assaulted her, causing several injuries, including her face.

Undersecretary of the Ministry of Health, Dr. Wael Sheikh, said the nurse, Hala Ahmad Halima, was attacked by many colonizers in Huwwara and suffered several injuries, including her face.

He said the colonizers maced Hala and hurled stones at her while heading to her work at the Salfit governmental hospital.

Dr. Sheikh phoned the wounded nurse and denounced the seriously escalating Israeli crimes and violations against the civilian population, including medics and journalists, in several parts of the occupied West Bank.

He added that, despite her wounds, Hala decided to return to work at the Maternity branch of Salfit governmental hospital.

Dr. Sheikh saluted the Palestinian medical teams for their determination and steadfastness in the face of Israel’s aggression and crimes.

‘’Unfortunately, due to international silence and complicity, this latest attack would not be the last,” he added.

On Thursday evening, groups of fanatic paramilitary colonizers continued their invasions of Huwwara town, and fired many live rounds at Palestinian homes, in addition to burning cars and buildings.