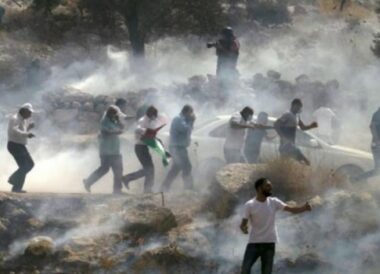 On Friday, Israeli soldiers injured several Palestinians in Beit Dajan, east of Nablus, in the northern part of the occupied West Bank.

The Palestinians held the weekly procession in the town and chanted against the ongoing Israeli occupation, escalating violations, and illegal Israeli colonialist activities.

They added that the soldier shot a young man with a high-velocity gas bomb in the leg and another young man in the arm; several Palestinians suffered the effects of tear gas inhalation.

Earlier Friday, the soldiers killed two Palestinians, including a doctor, in Jenin, in the northern part of the occupied West Bank.