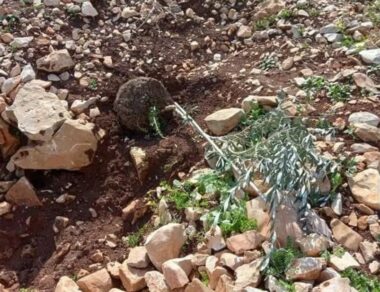 On Wednesday, illegal Israeli colonizers uprooted at least sixty Palestinian olive saplings and destroyed an agricultural shed in the ar-Ras area, west of Salfit, in the central part of the occupied West Bank.

The owner of the olive orchards, Fayez Abdul-Dayem, stated that the colonizers came from a recently installed illegal colonialist outpost on stolen Palestinian lands in the al-Khalayel lands in the ar-Ras area.

He added that he and his family planted the sapling just a few days ago and said that the colonizers also destroyed windows and doors of an agricultural room he built on his land.

It is worth mentioning that, approximately three months ago, Israeli soldiers invaded Palestinian orchards in the ar-Ras area and uprooted at least 250 olive trees.