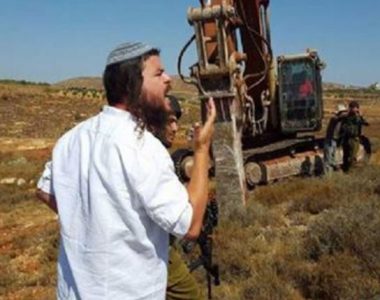 Rateb Jabour, the media coordinator of the Popular Committee against the Annexation Wall and Colonies in southern Hebron, said the Israeli assailants brought electric saws, and bulldozers, before uprooting the trees.

He added that the attacked lands are owned by Palestinians from the families of Morr, Abu Qbeita and Moghannam.

Jabour also stated that the attack is part of the ongoing attempts to expand the illegal Ma’on and Havat Ma’on colonialist outposts, built on private Palestinian lands east of Yatta town.

The colonizers have been conducting repeated violations and invasions into the Palestinian lands in the area to expand many nearby colonies and outposts, such as Karmiel, Avigal, Mitzpe Yair, in addition to Ma’on and Havat Ma’on.

It is worth mentioning that the Palestinians have been denied access to their own lands for several years, due to illegal Israeli policies aiming at removing them from their lands, to build and expand the colonies and outposts.