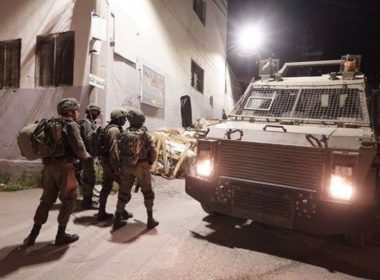 Israeli soldiers abducted, on Tuesday at dawn, thirteen Palestinians from their homes in several parts of the occupied West Bank, and illegally confiscated cash from some of the invaded homes, in addition to seizing one car.

The Israeli army claimed the soldiers located weapons in some of the homes, and confiscated cash “used to arm Palestinian fighters,” in Hebron and Tulkarem.

The army said it confiscated thousands o Shekels from Tulkarem, and Nablus, in northern West Bank, in addition to Hebron, in the southern part of the West Bank.

The soldiers invaded and searched many homes in Bethlehem governorate, and abducted two former political prisoners, identified as Shadi Nayef al-‘Amour 23, and Jamal Sabah, 20, from Teqoua’ town, east of the city.

The soldiers also abducted another young man, identified as Yazan al-Bal’awi, 22, from his home in Beit Jala city, northwest of Bethlehem, after breaking into his property and violently searching it, causing serious damage.

In addition, the soldiers stormed and ransacked many homes in Hebron city, in the southern part of the West Bank, and fired concussion grenades at Palestinians, protesting the invasion.

In Nablus, in northern West Bank, the soldiers invaded Madama and ‘Aseera al-Qibliyya towns, south of the city, before searching many homes.

Many local youngsters hurled stones at the invading soldiers, while the army fired gas bombs and concussion grenades, in addition to many flares.

In Jenin, in northern West Bank, the soldiers invaded Sanour town, south of the city, before storming the home of Allam Gharbiyya, and interrogated him along with his family, while ransacking the property, causing damage.

The soldiers also installed roadblocks at the main road of the town and prevented the Palestinians from entering or leaving it for several hours.

In Tulkarem, also in northern West Bank, the soldiers invaded the Southern Neighborhood, before storming the home of a former political prisoner, identified as Rami al-Battah, and confiscated his car.

The soldiers were extensively deployed in various streets in Tulkarem and installed many roadblocks.