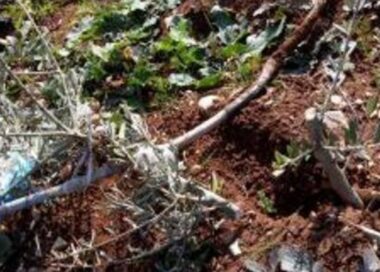 On Thursday, illegal Israeli colonizers invaded large areas of Palestinian farmlands and orchards and had their livestock feed on hundreds of olive saplings and fifteen dunams planted with Hummus plants near Bethlehem in the occupied West Bank.

Ibrahim Mousa, the Mayor of Al-Khader town south of Bethlehem, said the colonizers came from the illegal Sidi Boaz colony, built on Palestinian lands, west of the town.

He added that the colonizers brought their large flock of sheep into the Palestinian lands to feed on the plants and olive saplings.

The colonizers frequently invade Palestinian lands and attack the farmers in Ein al-Qassis and Ein al-Ghaweet areas in Al-Khader.

The attacks include uprooting crops and trees, assaulting the farmers, releasing their dogs to attack the Palestinians, and bringing their livestock to graze in the farmlands.