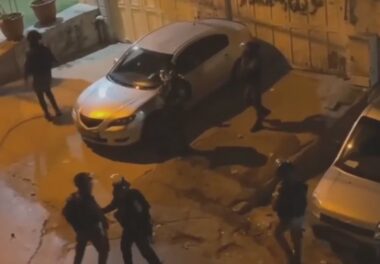 RAMALLAH, Thursday, May 05, 2022 (WAFA) – Israeli forces today and Wednesday evening detained at least eight Palestinians from various parts of the West Bank, according to local and security sources.

Police also detained three others from the courtyards of the flashpoint site as they beefed up their deployments on Wednesday evening in anticipation of the settler intrusions.

Police stormed the Jerusalem neighborhood of Batn Al-Hawa in Silwan and indiscriminately opened fire on local teenagers attempting to block their passage. No injuries were reported though.

In Bethlehem district, the sources confirmed that two teens, aged 13 and 14, were abducted by Israeli soldiers from the vicinity of the eastern entrance of the Aida refugee camp.

Meanwhile, a Palestinian from the besieged Gaza Strip was detained in the vicinity of the border fence, east of Khan Younes.