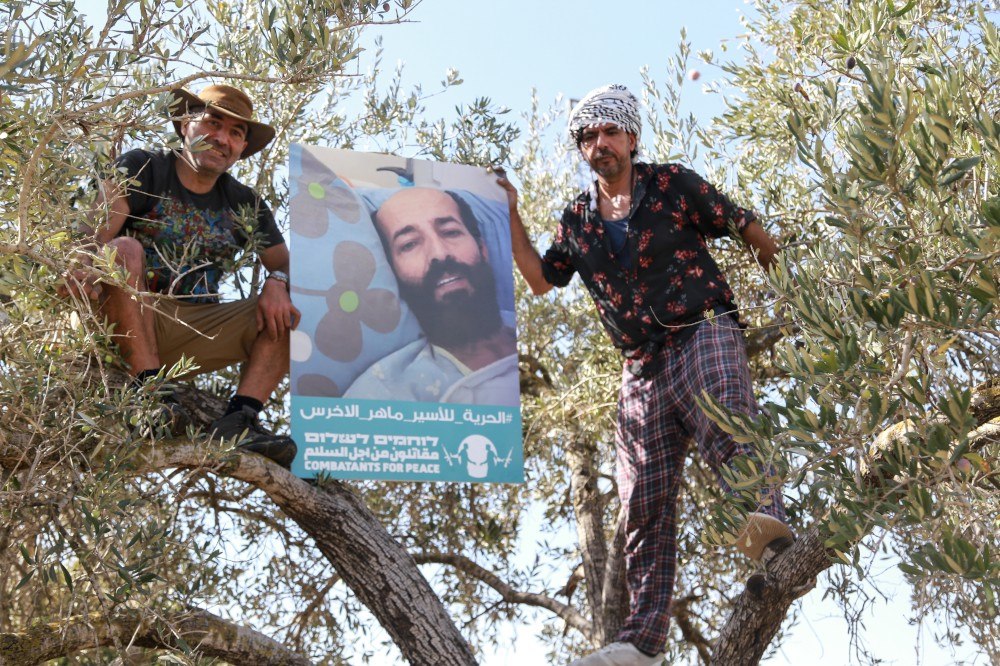 Israeli and Palestinian Combatants for Peace activists, as part of the movement’s olive harvest campaign, joined Palestinian farmer Muhammad Adwan, from the village of Azzun in the northern West Bank, on Friday to help him pick his olive trees on his land in the Al-Salamah area adjacent to the Ma’ale Shimron settlement.
“With the beginning of each harvest season, Israeli settlers assault us and prevent us from harvesting,” Mohammad said. “A year ago, the settlers and the Israeli occupation soldiers shot at my son and held us for hours. I feel joy and relief that Combatants for Peace activists are with us here today to help us pick the olives. “
Activists also took the opportunity to send a message of solidarity with political detainee Maher Al-Akhras, who has been on hunger strike for 90 days. His hunger strike is in protest of his so-called ‘administrative detention’, in which he is held without charges by Israeli authorities for months on end. Activists hung pictures of Maher on olive trees.
During the olive harvest season, Israeli occupation soldiers and settlers step up the frequency of attacks targeting Palestinian farmers and their olive trees. Attacks such as burning trees and preventing the owners of land from accessing their olive groves are commonplace during the month of October each year — a critical window of time during which the olive harvest must be completed. Many Palestinian families depend on the olive harvest for their annual income, as olive oil is a major part of the Palestinian economy.
“We are here today to support Palestinian farmers. The olive tree is part of Palestinian culture and a history that we are trying to preserve from the continuous attacks by Israeli occupation forces”, explained Suleiman al-Khatib, the Palestinian executive director of Combatants for Peace.
Friday’s event is part of the olive harvest campaign that Combatants for Peace is carrying out to help Palestinian farmers gain access to their olive fields, especially those located near Israeli illegal settlements and the Separation Wall.