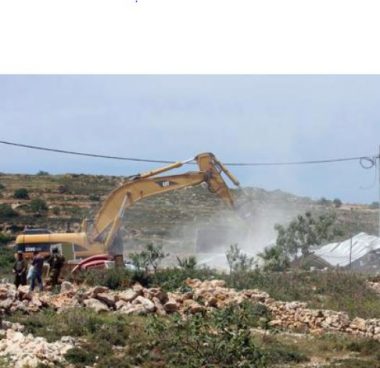 An Israeli court ordered, Thursday, the demolition of seven Palestinian residential buildings in Susiya village, south of Hebron, in the southern part of the occupied West Bank.

The court was looking into petitions filed by Palestinians living in the targeted homes, and said that the “Civil Administration Office,” which is run by the military in the occupied West Bank, has the green light to demolish seven homes, inhabited by 42 Palestinians, half of them are children, and some of the older residents suffer from chronic conditions.

The army also wanted to demolish the local clinic, but the court decided to delay the issue until the end of this July, to give the residents some time to find an alternate clinic.

The military was demanding the demolition of twenty buildings, but the court approved the destruction of seven.

The court said that “the army must consider humanitarian issues when enforcing construction and planning laws,” in the occupied West Bank.

The remaining buildings are subject to further deliberations, and are still threatened with demolition, pending a court ruling in appeals, which include construction plans presented by the villagers.

The court will be looking into these maps and plans on July 5th, 2018, but the army is unilaterally planning to demolish them.

The villagers face the constant threat of losing their homes in Susiya, while the military already demolished many homes and structures, in addition to the local mosque, especially since Israel is trying to relocate them to a different area, to build and expand its illegal colonies, in direct violation of International Humanitarian Law.