Soldiers Abduct A Father And His Son Near Tubas 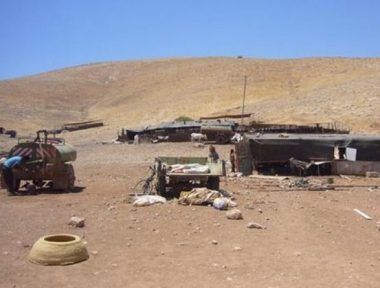 Israeli soldiers abducted, on Thursday evening, a Palestinian father and his son in Khirbat al Hadidiya Bedouin village, in the Northern Plains of the occupied West Bank.

Mahmoud Sawafta, the head of the Palestinian Prisoners’ Society (PPS) in Tubas, said the soldiers invaded the village, and abducted Abdul-Rahim Bisharat, and his son Moath, before moving them to an unknown destination.

He added that the soldiers searched many residential tents in the village and interrogated the residents.

One of the searched tents belongs to Abdullah Bani Odah, whose son was abducted by the soldiers, in a previous invasion, two days ago.