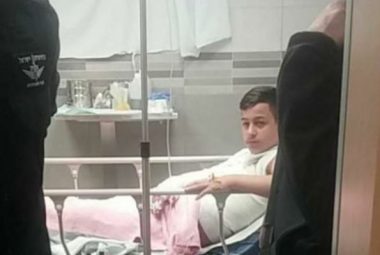 An Israeli Court decided, Tuesday, to remand a wounded child, who is currently at an Israeli hospital receiving treatment for severe burns, until further deliberations are held this coming Thursday. The child was abducted from a Palestinian hospital.

The child, Asadeddin Abu al-Hawa, 14, from at-Tour neighborhood, in occupied Jerusalem, was injured by the Israeli military during an invasion into his area and suffered severe burns in his back and arm.

After the child was injured, Palestinian medics rushed him to the al-Makassed Islamic Charitable Society Hospital, in Jerusalem, but the soldiers invaded the medical center, five days ago, abducted him.

The army then moved the child to an Israeli hospital, posted soldiers at his room’s door, and refused to allow his family to visit with them.

Following an appeal filed by Khaldoun Najm, a lawyer representing the child, an Israeli court allowed his parents to visit with him at the hospital, and to stay in his room.