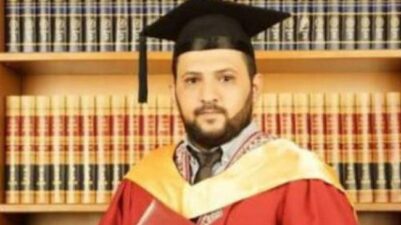 On Sunday, an Israeli court issued a sentence of 10 months in prison to Hamdallah Mardawi, who was abducted in September at the King Hussein border crossing between Jordan and the West Bank when he was returning home after having earned his journalism degree in Malaysia.

Mardawi is from Hableh town, the south of Qalqilia, in the northern part of the West Bank.

According to PressTV, Mardawi had been in Malaysia, where he had earned a master’s degree in public relations and media.

Mardawi’s father told reporters that Israeli intelligence forces transferred his son to the Petah Tikva interrogation center immediately after his abduction at the border crossing.

They initially held him without charges, and extended his ‘administrative detention’ several times. On Sunday, the Israeli court sentenced him to ten months, but it is still unknown what his alleged crime is.

In a separate incident involving the illegal detention of journalists, on Sunday Israeli forces detained Palestinian journalist Bushra Tawil. She was abducted while driving her car, when Israeli soldiers stopped her at a checkpoint north of Nablus.

Mardawi’s abduction in September was documented in a report of press freedom violations, in which the Mada Center found 31 violations against Palestinian journalists by Israeli forces during the month of September.