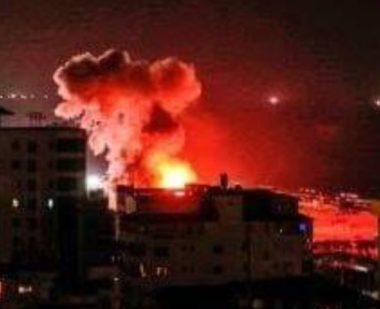 Israeli drones fired, on Saturday evening, two missiles into a site, near the perimeter fence, in the eastern area of Central Gaza. Several Palestinians, including medics, suffered the effects of teargas inhalation in Rafah.

Media sources said the missiles struck a structure between the cities of Deir al-Balah in central Gaza, and Rafah, in the southern part.

They added that the missiles caused serious damage, and a fire, but did not lead to casualties.

The Israeli army claimed it was retaliating to “flammable balloons” that were flown from Gaza into lands in colonies near the fence of the besieged coastal region.

In related news, many Palestinians suffered the severe effects of teargas inhalation near the fence in Rafah, after the soldiers fired a barrage of high-velocity gas bombs at them.

Most of the wounded Palestinians were treated by medics, while some of them were moved to Abu Yousef Najjar hospital, in Rafah, for further treatment.

The Health Ministry in Gaza said the army also targeted several ambulances with gas bombs, causing many medics to suffer the effects of teargas inhalation.