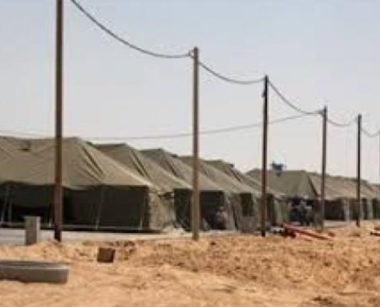 Israeli soldiers attacked, on Saturday evening, many Palestinian detainees in Section 7, Branch A, of the Negev Desert Detention Camp.

The detainees said the soldiers conducted provocative body searches, in addition to searching their bunks and property, and assaulted many of them.

They warned of the repeated and escalating assaults and violations against them, especially amidst international silence regarding their suffering, including the bad living condition and lack of adequate medical care.

The Negev Detention Camp is one of the largest Israeli prisons, holding around 2000 Palestinian detainees; most of them are held under arbitrary Administrative Detention orders, without charges or trial.

Palestinian Researcher, former political prisoner and the head of the Statistics Department of the Detainees Committee, strongly denounced the international idleness regarding the suffering of the detainees, and the serious crimes and violations they are subjected to.

“This silence is complicity; it enabled and allowed Israel to continue to commit serious violations against the detainees; it allowed Israel to act in direct violation of all international laws and treaties, without punishment,” Ferwana, who also runs Palestine Behind Bars website said.

Baroud was taken prisoner in 1991, suffered from various health conditions, in addition to a psychological condition; he died from an internal hemorrhage, and was only moved to Soroka Israeli hospital after losing consciousness.