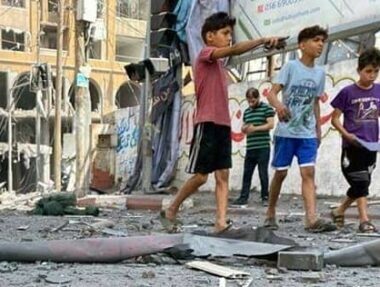 Palestinian medical sources have reported, Friday, that a teenage boy was injured after Israeli explosive ordnance detonated near him in Gaza city.

The incident took place in the Sheja’eyya neighborhood, east of Gaza city when the teen found the unexploded ordnance in the rubble of a bombarded building.

The Palestinian Centre for Human Rights, which documented these attacks, has called upon the International Criminal Court to open an investigation into the occupation’s crimes during this military aggression, and reiterates its call upon the High Contracting Parties to the 1949 Fourth Geneva Convention to fulfill their obligations under Article 1; i.e., to respect and ensure respect for the Convention in all circumstances and their obligations under Article 146 to prosecute persons alleged to commit grave breaches of the Fourth Geneva Convention.

These grave breaches constitute war crimes under Article 147 of the same Convention and Protocol (I) Additional to the Geneva Conventions regarding the guarantee of Palestinian civilians’ right to protection in the Occupied Palestinian Territories (West Bank, Gaza Strip, Golan Heights).