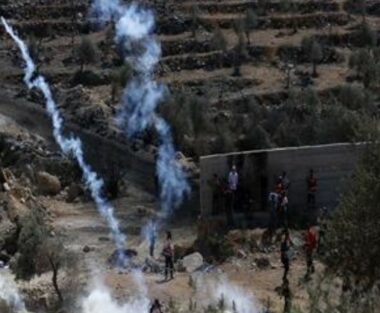 Ahmad Jibril, the head of the Emergency Department at the Nablus office of the Palestinian Red Crescent Society (PRCS), said the soldiers shot one Palestinian with a live round in the thigh, thirteen with rubber-coated steel bullets, and caused 91 to suffer the effects of tear gas inhalation. Jibril added that 12 Palestinians suffered fractures and bruises, after falling while the soldiers were chasing them.

It is worth mentioning that, on Friday morning, the soldiers closed all dirt roads leading to Sbeih Mountain, after placing sand hills on them, to prevent the Palestinian vehicles from reaching it.