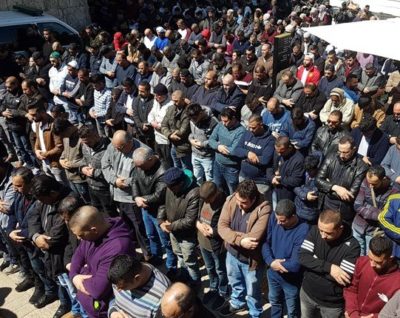 Hundreds of Palestinians were forced to hold their weekly prayer service on the street in Jerusalem on Friday, after Israeli forces blocked access to the Al Aqsa Mosque, which is the largest mosque in Palestine and the third-holiest site for Muslims around the world.

The closure of the Al Aqsa Mosque to Palestinian worshipers on Friday comes in the midst of escalating tensions between the Islamic Waqf Foundation which maintains the mosque and its grounds and the Israeli authorities, who control access to it.

The night before, on Thursday evening, Israeli Soldiers Abducted Seven Women near Al-Aqsa,

in just the latest in a series of arrests of Palestinian worshippers, as well as Mosque officials, by Israeli authorities.

On Friday afternoon, when hundreds of Palestinians arrived at the Mosque for weekly prayers, armed Israeli military forces prevented them from entering the holy site.

Instead, they were forced to turn back and to hold their prayers at the Lions Gate, on the street. As they prayed on the street, Israeli forces began surrounding the worshipers. When the prayer ended, the police pushed the crowd back and further away from the mosque.

The closure of the Mosque has been an ongoing issue since early February, when Israeli forces used locks and chains to close the al Rahma Gate (Gate of Mercy), which is a main entrance for Palestinians to enter the Mosque from the east.

Sheikh Raed Daana told reporters from Ma’an News Agency, after he was banned for six months from entering Al Aqsa by Israeli Authorities, “Israeli authorities are banning worshipers from performing prayers, from practicing our faith, they (Israel) are the ones carrying weapons and using force to prevent us from reaching Al-Aqsa.”