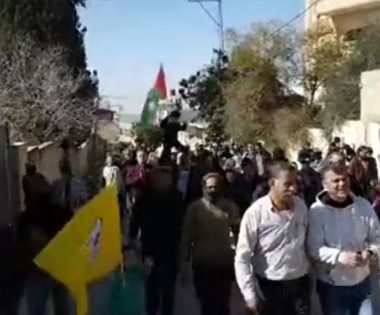 Morad Eshteiwi, the media coordinator of the Popular Committee in Kufur Qaddoum said the soldiers resorted to the excessive use of force against the protesters, by firing many rubber-coated steel bullets at them, in addition to a barrage of gas bombs and concussion grenades.

He added that three Palestinians were shot with rubber-coated steel bullets, and dozens suffered the effects of teargas inhalation.

All wounded Palestinians received treatment by Red Crescent medics, without the need for hospitalization. The soldiers also attacked many journalists, and hurled concussion grenades at them, to prevent them from documenting the assault.

In addition, the soldiers stormed and searched several homes, and occupied their rooftops to use them as firing posts.

The Palestinians hold processions in Kufur Qaddoum every Friday and Saturday, for the eighth consecutive year, demanding the army to reopen the town’s main road, which was blockaded fifteen years ago, to enable easy access for illegal colonialist settlers driving to and from the Kedumim Israeli colony, built on private Palestinian lands.