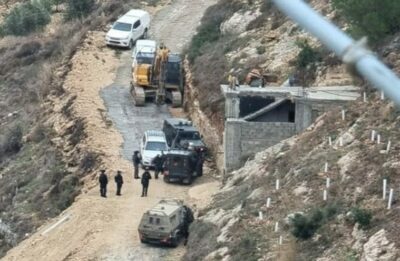 Israeli forces demolished, on Tuesday, a Palestinian-owned home in the central occupied West Bank town of Nahalin, west of Bethlehem city, according to a local official.

Fanoon added that once the area was secure, a bulldozer carried out the demolition operation, sparking protests from the local Palestinian residents.

Soldiers responded by firing tear gas canisters and concussion grenades at those who protested the destruction of the home, belonging to local resident, identified by Quds Press as Atef Jamil Youssef Al-Nais.

The 1995 Oslo Accords split the occupied West Bank into three parts, Area A (18%) was to be strictly governed by the Palestinian National Authority, (PA) while Area B (22%) was to be governed by both the occupation authorities and the PA.

Area C, which consists of 60% of the occupied West Bank is under the full administrative control of the Israeli occupation authorities.

Israeli authorities do not allow Palestinians to build in Area C, and frequently demolish homes under the pretext of being located in Area C.