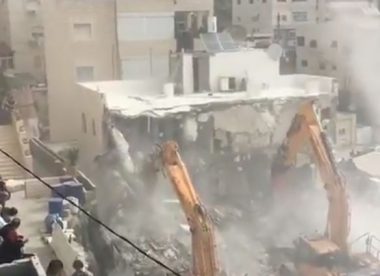 Israeli forces, on Tuesday, demolished a house belonging to a Palestinian resident in the town of Deir Dibwan, east of the West Bank district of Ramallah, said local WAFA sources.

Israeli forces reportedly stormed the area, accompanied by bulldozers and heavy machinery, before proceeding to demolish the house.

The house belongs to a local resident who was identified as Mohammed Ali.

Aref Daraghmeh, who monitors Israeli violations in the Jordan Valley, said that Israeli soldiers forced four families to temporarily leave their homes, until 6:00 AM on Wednesday, to make way for military maneuvers with live ammunition in the area.

This is not the first time that these families have been forced out of their homes, under the same pretext.

The army usually conducts drills in the occupied West Bank, especially in the Jordan Valley; Palestinian families often receive notices ordering them to leave their homes, for various periods, until the drills are over.

“It is extremely difficult for whole families, including children, to be evacuated on such short notice. With no properly arranged place to stay, they must find a way to ensure shelter, food and drink away from home in the intense, grueling heat of the Jordan Valley,” said B’Tselem, an Israeli human rights center.