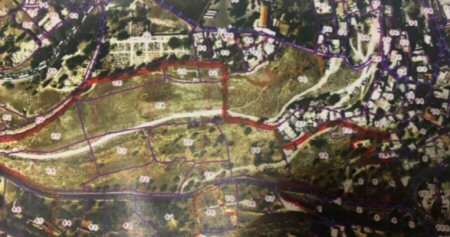 Palestinians say that Israeli authorities in Jerusalem barred them from tending to their plants in the area targeted for confiscation.

On August 10, 2018, the Israeli municipality in occupied East Jerusalem notified the Palestinian neighborhood of Silwan of an impending land confiscation project. Flyers hung by Israeli authorities identify dozens of acres in the neighborhood that will be taken for the installation of walkways and irrigation as well as “gardening purposes” over the next five years.

However, according to the Wadi Hilweh Information Center, Palestinians own most of the targeted area, along with the Greek Orthodox Church. Moreover, while Palestinians used the area to grow fruit and olive trees for decades, Israel Nature and Park Authority staff recently have arrested or threatened them with arrest for tending to their plants.

Earlier this month, settlers and Israeli politicians inaugurated a Jewish tourist center in a Palestinian-owned home in Silwan.