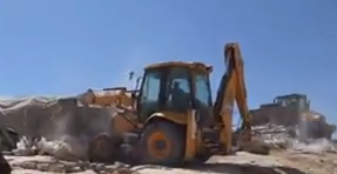 The Israeli military demolished two homes, an outdoor kitchen and a barn on Saturday in Wadi Jheish and Umm Al-Daraj, in the village of Susiya, in the south Hebron hills. The destruction came despite a pledge by Israeli authorities that they would hold off on destroying Palestinian homes and forcing Palestinian families into homelessness during the Muslim holy month of Ramadan.

According to local sources, two armored D9 bulldozers, manufactured by the Caterpillar company in Peoria, Illinois, showed up in the village of Wadi Jheish midday Sunday, and presented the owners of the homes with demolition orders issued by the Israeli military, then proceeded to demolish the homes.

‘Operation Dove’ volunteers were present during the demolition, and tried to stand between the Israeli soldiers and the Palestinian residents. But the soldiers pushed them out of the way and began assaulting the Palestinians who were present, including men, women and children.

After destroying the home in Wadi Jheish, the bulldozers proceeded down to Umm al-Daraj, where they destroyed another home, rendering another family homeless.

A total of 14 people, including children, were made homeless by the destruction of their homes on Sunday.

The demolitions came despite a pledge by the Israeli authorities that they would halt all demolitions during the month of Ramadan, which is taking place throughout the month of June this year.

According to Israeli reporter Amira Hass, writing for Ha’aretz, “In 1986 the original village of Susya was declared a national park and its residents were expelled to their adjacent agricultural lands. In 2001 they were expelled again, and the caves and sheds in which they lived were demolished. The High Court of Justice ordered the demolitions stopped and allowed the residents to remain at the site, but did not order the Civil Administration to permit the rebuilding of the homes and animal pens that had been thrown down. As a result, essentially all the structures in Susya are without permits, including the playground, bathrooms, the school building and a visitors’ tent.

“Israel has never prepared a master plan for the village and has rejected all the master plans the residents have submitted. The nearby Jewish settlement of Sussia, whose orchards encroach on the Palestinians’ farmland, and the Regavim NGO have been pressuring the Civil Administration to enforce the demolition orders against Palestinian Susya’s structures.”

More than 500 homes and other buildings owned by Palestinians have been destroyed by the Israeli military in the first half of 2016.

This is an increase of more than 100% from last year, when 548 Palestinian homes were destroyed during the entire year.