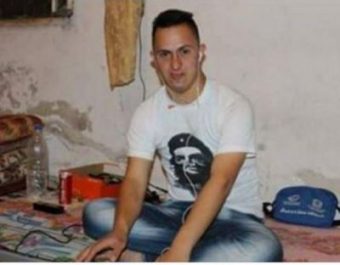 The Palestinian Health Ministry has reported that a young Palestinian man died, on Sunday evening, from serious wounds he suffered on May 4th, after Israeli soldiers shot him during an invasion of Sa’ir town, northeast of Hebron.

The sources said Arif Sharif Jaradat, 22, was shot with live Israeli army fire, and died of his serious wounds at the al-Ahli hospital, in Hebron City. The Palestinian suffered from Down’s Syndrome. Jaradat was shot in the abdomen, and the bullet exited through his back, after the soldiers invaded Wad Ekhneis area, in Sa’ir town, and clashed with local youths. Many Palestinians were also wounded during the invasion.

The chief of the Prosecutor’s Office in Hebron ‘Ala Tamimi called for documenting the Israeli crime, and to prosecute Israel for its ongoing violation against the Palestinian people.