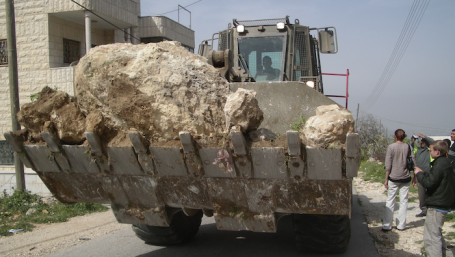 Israeli bulldozers demolished two Palestinian-owned homes in the area of al-Qubbeh, to the south of Jerusalem.

Eyad Edi’es, a homeowner, told WAFA that staff from the so-called Israeli “Civil Administration” escorted a bulldozer into the area and demolished the two homes without a prior notice.

He noted that the homes were constructed several years ago, but he and his brother carried out restoration works.

As a result, two families with 10 members were displaced and became homeless.

Using the pretext of illegal building, Israel demolishes houses on a regular basis, to restrict Palestinian expansion in occupied Jerusalem.

At the same time, the municipality and government build tens of thousands of housing units in illegal settlements in East Jerusalem, for Jews, with a goal to offset the demographic balance in favor of the Jewish settlers in the occupied city.

They are also discriminated against in all aspects of life, including housing, employment and services, and are unable to access services in the West Bank due to the construction of Israel’s separation wall.