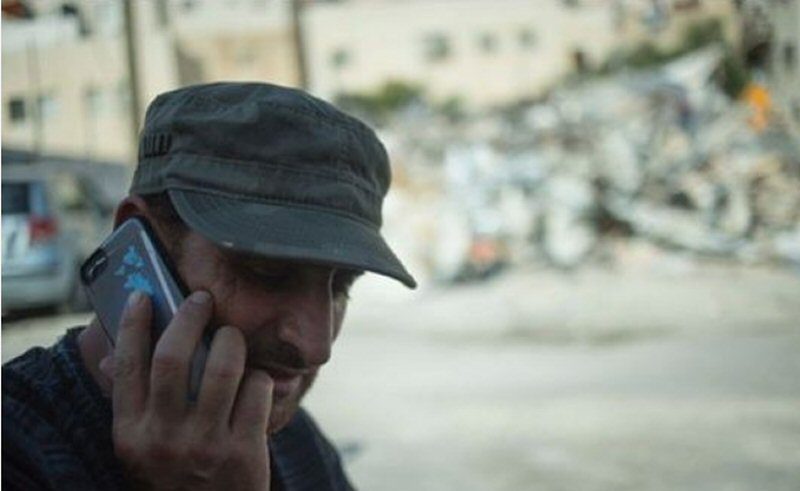 Jawad is a director of the Wadi Hilweh Information Center, in Silwan, East Jerusalem. The center was funded by residents to document human rights violations and to improve the lives of people form the community through shared activities. The photos, below, show the story of Jawad in details.

Meet Jawad, director of the Wadi Hilweh Information Center, in Silwan, East Jerusalem. The center was funded by residents to document human rights violations and to improve the lives of people form the community through shared activities.

“Actually, it is much more crowded than Gaza; 55.000 Palestinians and around 400 settlers live here. The settlers are controlling over the life of the 55.000 Palestinians, they try to make us feel like strangers in our own home. They can close an entire street whenever they want…there are a lot of clashes here.”

An Israeli excavation site in front of the of the Wadi Hilweh Information Center.

Based on their historic understanding of Silwan as ‘The City of David’, Israeli authorities have started several archaeological and touristic projects in Silwan. Many of these projects are implemented on private Palestinian property.

“This is Wadi Hilweh (Arabic for beautiful valley), a part of ancient Jerusalem. Today, the settlers control over %35 of Wadi Hilweh; there are many areas that we are not allowed to enter.

“They also control the archaeological, touristic and historical sites, so we do not benefit from tourism. They are trying to get more houses in Silwan. They say it is where king David and King Solomon walked, so they want to demolish the houses and to build the ‘Kings Garden’. The tourists that are coming have no idea what is going on.”

The rapid work on excavation sites has a side-effect: several Palestinian houses in the neighborhood started to show cracks in their walls and foundations.

Graffiti on the Madas cultural center in Silwan.

“Silwan was the basket of food for Jerusalem until the war in 1967. 60% of vegetable sold in the markets of Jerusalem were from Silwan.”

A “dream house”, made by children at the cultural center.

“One time, a German minister came to Silwan and visited our cultural center. One week after his visit they destroyed the center. When the municipality destroyed the center, they took everything, even the espresso machine. After that, the Germans had a bad feeling and they decided to buy part of the center equipment.”

Samer, a resident of Silwan, in his house.

Jawad: “When I first met Samer in 2004, I heard from other people that he sold his house to settlers. So, I organized a big community meeting to talk about this case. Samer showed us papers which proved that he did not sell the house and that the settlers were playing with us. We gave everyone an opportunity to speak.

“Before, they were almost isolated and did not communicate with each other, so this meeting was very important because people finally listened and talked to each other.

“After this meeting, I got arrested because they know it is very dangerous to bring people together. I was arrested 42-45 times for that reason, talking to the people and giving information. For example, I created a Facebook page telling people how to deal with settlers legally. They arrested me, and wanted to close the website and the Facebook page, so there was a lot of pressure.”

Samer shows his electricity bills. For many residents of Silwan, the costs of living have become nearly impossible to bear. Despite that, most of them refuse to sell their houses and choose to stay in Silwan.

Jawad’s phone is always ringing: “If anybody arrested or they want to demolish any house in the neighborhood, people call me. They know I have connection with lawyers.” This time, he got called to a demolition site.

Omar in front of his demolished shop.

“20 days ago, they sent us a demolition order, so we hired a lawyer to object the decision. They offered me money to sell the house, but I refused. They told the lawyer that they will not demolish the house without informing us. They lied, because today they demolished the house. They gave us one hour notice; all my friends came to help. This place was a bookshop and a printing store.”

After the demolition, Omar and his friends put up chairs across the street from the demolition sight. Family and neighbors come by with fresh coffee to show their support. Omar says that, with all the money his friends offered in the hours after the demolition, he could have rebuilt the house immediately. “Solidarity is important here, because everyone knows that their house could be next. But, we are steadfast here, we are ready to live in a tent before we have to leave our country.”

Jawad at his house in Wadi Hilweh, Silwan.

“I don’t know if I see myself as a human right defender, I don’t know the right definition of ‘human rights defender’. Actually, I am an identity defender, a culture defender. ‘Human rights defender’ is general, and, wherever you are, you do the same. But, the focus for me is Palestine. What got me where I am now is the environment of Silwan. I really do not know if I am a human right defender or not, I never thought about it.”

Jawad moved to Germany to study, but he came back when authorities tried to seize his father’s house. He decided to stay and fight for the house and for his neighborhood.

“Sometimes, names are more important than titles. Like, for us, it is important that ‘Wadi Hilweh’ does not disappear, that is why we call the center ‘Wadi Hilweh Information Center’, because they intended to change all the neighborhood’s names. When I came back from Germany, I saw people using the new Jewish names for some neighborhoods. The Israelis are trying to teach us the words they want us to use; they do not want to use the Palestinian names”.

A girl from Silwan during a trip with the center’s summer camp. Her T-Shirt says “I love you Silwan”.

Jawad: “I am so tied to this place and I don’t want to leave. All activities I have started, for women, children and youth, aim to make the place attractive. The settlers wanted us to hate Silwan, to make our life terrible, so we have nothing to do here. Our work is to make people say, ‘It is a nice place’. We can offer them good things. For me, working with children and youth, the most important thing is to teach them about the identity of Palestine.

“We have to insist on our identity as Palestinian under occupation. It is the only way how we remain.”