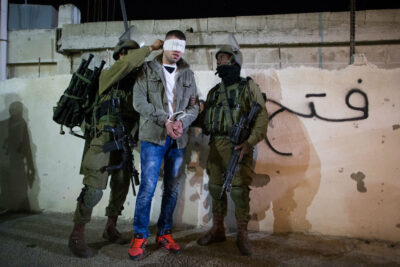 Israeli forces detained, from Thursday evening to Friday dawn, a total of seven Palestinians, including six from Salem village and one from Tubas city, the Palestinian WAFA News Agency reported.

Soldiers invaded the northern West Bank village of Salem, east of Nablus, rifled through the homes of many Palestinians, and detaining six civilians.

Three Palestinian teenagers were detained by the army from the al-Jalazoun refugee camp, north of Ramallah city, in the central West Bank, soldiers opened fire towards civilians protesting the incursion.

A group of undercover agents, on Thursday, abducted two teens from their homes in Ras Al-Amoud neighborhood, in Silwan town, occupied East Jerusalem.

Wadi Hilweh Information Center (Silwanic) published a video of the assault and abduction of one of the Palestinian teenagers, identified as Mohammad Ali Al-Ghoul.

In the northern West Bank, soldiers stormed the Jenin refugee camp and Jenin city, and opened fire at youths who protested.

Four injuries were recorded, all of whom were evacuated to hospital for treatment.

One Palestinian was detained by the army from Kafr Dan town, northwest of Jenin city.