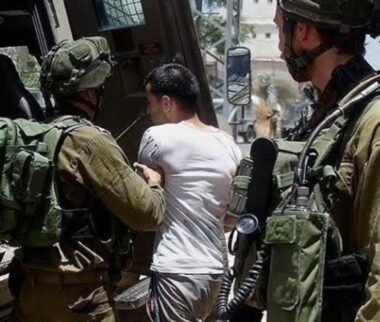 Several Palestinian civilians were detained by Israeli forces, on Monday, from different areas of the occupied West Bank, according to the Palestinian News & Information Agency (WAFA).

Israeli forces stormed a Palestinian-owned home and detained a former prisoner after searching his home in Jaba‘ town, south of Jenin, in the northern West Bank.

In the central part of the West Bank, soldiers invaded a home in Beitunia town, west of Ramallah city, and detained one Palestinian.

Northeast of Ramallah, Israeli troops stormed another home and detained one man from al-Mughayyir village.

The Wadi Hilweh Information Center (Silwanic) reported that Israeli forces assaulted Sufian Al-Ajlouni and Muhammad Saeed in the Bab Al-Asbat or Lion’s Gate in the occupied Old City of Jerusalem, before detaining them.

It added that the young men were taken to hospital for the necessary medical treatment.

Video from Wadi Hilweh Information Center (Silwanic)
[Below – The arrest of Sufian Al-Ajlouni and Muhammad Saeed after they were severely beaten in the Bab Al-Asbat area. They were transferred to hospital while they were under arrest for treatment]