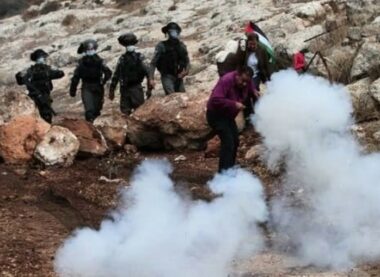 More than 100 Palestinians were injured, Wednesday, when the occupation army suppressed a demonstration to condemn the Israeli forces’ killing of Shadi Omar Lutfi Salim in Beita town, south of Nablus, in northern occupied West Bank.

According to the head of the Emergency and Ambulance Department at the Palestinian Red Crescent Society (PRCS), Ahmad Jibril, one protestor was shot with live a live round, 19 with rubber-coated steel rounds, 72 suffered the effects of tear gas inhalation, while 14 more were injured from falls as they were being chased by soldiers.

The majority of the wounded were treated at the scene, while three of the more seriously injured were transferred to hospital for further medical intervention.

On Tuesday, soldiers ambushed, and then shot and killed Shadi Omar Lutfi Salim, 41, near Beita Junction, killing him with live rounds.

The soldiers abducted the seriously injured man, taking him to an unknown location, and later pronounced him deceased.

Salim, who worked for the Beita Town Council, overseeing Palestinian water resources, was on his way home from work when soldiers ambushed him and killed him, for unknown reasons.