WAFA: “Three Sheikh Jarrah families get a court order temporarily suspending their eviction from their homes” 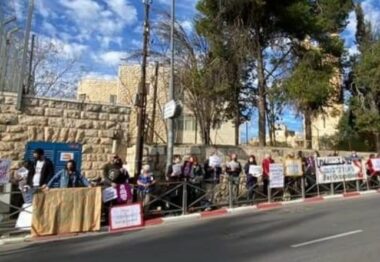 The family’s attorney, Sami Irsheid, said that the court accepted a petition submitted by him and attorney Hosni Abu Hussein on behalf of the Dajani, Hammad, and Dahoudi families to freeze the eviction decision that was supposed to enter into effect on Sunday until completion of the procedures for an appeal against the eviction, which will be later considered by the same court.

On Monday, the High Court is scheduled to consider another appeal by four other families in the Sheikh Jarrah neighborhood – Jaouni, Iskafi, al-Kurd, and al-Qadi – against their eviction from their homes for the benefit of Jewish settlers.

The order to evict the four families was issued in September 2020 and another ruling was issued a month later for the eviction of the other three families in favor of settlers who claimed ownership of the land the homes were built on.

The Palestinian families have contested the claim of the settlers, which they say are based on forged documents, and presented documents to the courts proving ownership of their homes and land.